I own a lot of music.  I have over 10,000 songs in my iTunes library.  After about 20 years of buying CDs, I've been trying to pare down the amount of physical media I own.  I use my work computer as my primary music library.  I back it up and bring it home and copy it to my media PC.

Looking at the unplayed songs one day, I noticed I had waaaay more Green Day than I realized.  This is somewhat surprising, as I wouldn't necessarily consider myself a huge Green Day fan.

Apparently I have 141 Green Day songs.

That's a lot of Green Day.

In October 2016, I attempted to listen to all them in one day.  This is my own personal Super Size Me. 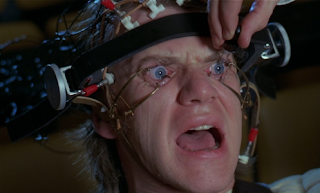 Feeling strong.  Made it though Nimrod and American Idiot without any issues.  Still going strong.

(cut to me barfing in the parking lot.)

(Subject was allowed to for a run at lunch and listened to no music.)

Bluh.  These are all starting to run together.

Huh.  This song's not bad.  Haven't heard this in a while.

I have a headache on one side of my head.

Not giving up yet.

21st Century Breakdown might be the one that takes itself the most seriously though (possibly the inspiration for this video?)


Experiment follow-up: It was a good six months after this before a Green Day song without immediately hitting skip.

Not really sure we learned anything helpful to man or science (other than "don't try this again").  But... I did it! 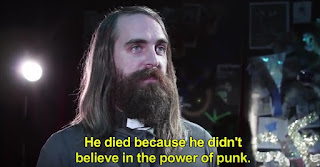 Posted by Patrick at 3:58 PM No comments: 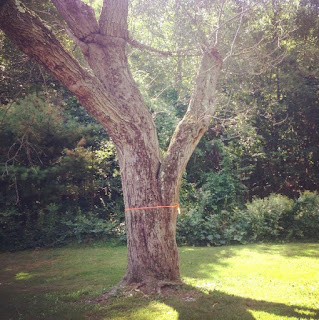 "You hear about Carl?"

"He got the Orange Ribbon."

"He hasn't been the since same since his wife died."

There's either a demon eating a live octopus or a dog trying to snorkel in the office next door to me.

Nevermind.
Posted by Patrick at 11:57 AM No comments:

I've got a old buddy who flips burgers for a living. I still check in on him once in a while.

Forget college... I don't even think he passed driving school.

He works hard, but his boss is kinda cheap.

No family. No responsibilities (other than his pet).

He just goes to work and hangs out with his buddies.

He doesn't have much. But he's happy.

Sometimes I envy him.

And his place is, like, weirdly affordable. Probably because it's a pineapple.

You know why it's so hard to cut back on sugar and alcohol?

Because those things are AWESOME.
Posted by Patrick at 9:04 AM No comments:

"OK Dogs. Everybody get on the Dog Bus. We're going to PetSmart."
Posted by Patrick at 9:18 AM 1 comment:

This Spring... Terror has a new face.

Posted by Patrick at 9:16 AM No comments:

One of the fun things to do in New England in the Spring is to drive around and guess whose basement is flooding.
Posted by Patrick at 9:05 AM No comments:

Hung out with the Dude-Bros at the barbershop the other day.

They've got a small barbershop on the first floor of an old house in mixed use residential / light commercial area.

They've got 2 giant TVs that are right in your face.

And they turn them up so they're loud enough to be heard over 4 sets of clippers running at the same time.

Last time I was there they were watching some Alaskan State Troopers show (which I was OK with).

This time they were watching Citizens Under Attack.  Which was some type of armed robbery surveillance footage show.  I was not OK with that.

Also, you're supposed to yell stuff at the TV.

Overheard at the same visit:

(It sounded like he was hunting bear with a handgun.  Seriously.)

New garden is doing great (except for the spinach... it just didn't grow this year).

We still need to put a gate on the fence.

As you can see in this crude awesome graphic, the new garden area gets much more mid-day sun.

Also... The relocated grass is growing nicely.  If I had moved all that grass by hand and it died, I would have been super pissed.

Posted by Patrick at 2:36 PM No comments: